Unbox tells the heroic tale of one box’s struggle to save the Global Postal Service (GPS) from certain demise! GPS have been losing parcels all over the place, and so, in a last-ditch attempt to save themselves, have developed what Amazon can only dream about – self-delivering packages! Only they haven’t quite got the formula right and some of the prototypes are…deliverally challenged. Enter: newbie – that’s you, and you’ve got a lot of work to do!

The game begins with some tutorial-style gameplay based in the hub world, which consists of a fleet of ocean liners, to teach you the basic mechanics you’ll use to play the game – running, jumping, attacking and unboxing! Unboxing is effectively a double-jump, however you can use up to 6 in a row and it is by far the most fun mechanic in the game. In fact, I spent a large amount of my first session playing just using this to fling myself around with gay abandon, trying to get as high and as far as I could go within the 6-unbox limit. You can also add a sneaky extra jump in if you’re near water (which you almost always are) as touching water gives you a one-shot reactionary jump which you can then tack onto unboxing up to 6 times.

Once you’ve completed the tutorial you end up being shipped off to your first destination, Paradise Isles – an island resort with a small shanty town, grassy cliffs, sandy beaches and blue seas to explore. In each level you must work towards collecting enough stamps to have a chance at battling Boss Wild – the leader of the Wild Cards, boxes who follow you around attempting to shock and explode you into oblivion. 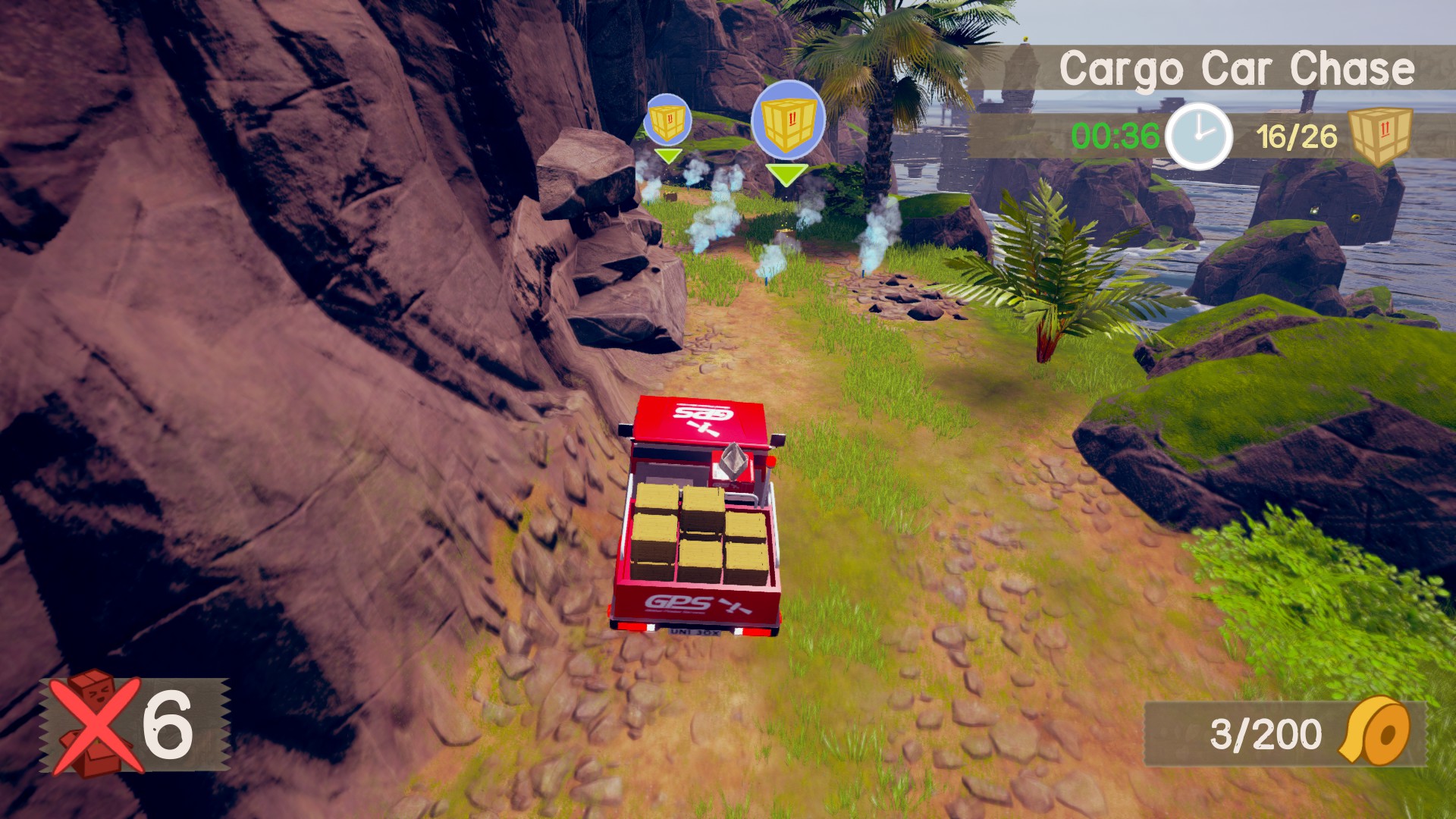 You can collect stamps by completing challenges set by other boxes you find or by randomly finding them hidden around the level.  You can also spend time collecting rolls of golden parcel tape (there are 200 in each level), hidden diary entries and freeing zippie boxes who have been trapped by evil Wild Cards. Fellow box, Bounce, is also on hand in each level to help you out with basic gameplay tips, in case you’ve managed to completely forget what you’ve been doing for the past however long you’ve been playing.

The box-set challenges are generally variations on either ‘collect them all’, ‘win the race’ or a combination of the two which is a little tedious after a while. They do introduce things like vehicles to add a bit of variation, and there is one delivery task in each level as an on-going rivalry between two characters, however the basic mechanic is the same; beat a certain time around a course whilst hitting all the checkpoints / collecting all the designated objects and avoiding any obstacles or enemies in your way. They are also really quite difficult considering how unwieldy your character can be, and when enemies are added into the mix it can quickly become annoying as their attacks are extremely powerful, and fairly relentless, culminating in explosions which send you careering off course and causing the game to respawn you back within the bounds of the challenge.

Once you’ve collected the necessary amount of stamps to fight the boss you are required to endure a boss battle which mainly consists of trying to fight your way through hoards of smaller enemies with fireworks shooting you from a distance to be able to take a shot at the boss. It’s the tried and true ‘3 hits and you win’ formula, and you’re rewarded with a cut-scene for your trouble and get to move onto the next area. From here’s it’s pretty rinse and repeat until your final showdown with Boss Wild at which point the story comes to a slightly bizarre but humorous conclusion (which makes a little more sense if you’ve been collecting the diary pages) before the credits roll.

I briefly chatted with 2 of the guys from Prospect at EGX and was unsurprised to learn that Unbox started life as a hackathon-made game around the theme of ‘what’s in the box?’ and was essentially Goat Simulator with cardboard. When they developed the game further they wanted there to be more to it than that, and so the storyline and challenges were added which gives the user the sense of purpose and progression that classic simulators lack. The racing parts of the game are undeniably ex-Codemasters born, and I was told that designer Jack Bognar had perfected the route to a T and then added 10 seconds for the time-limit. This still seems relatively harsh in some cases, and the game does suffer from crashes and soft-locks prone to these simulator style games. 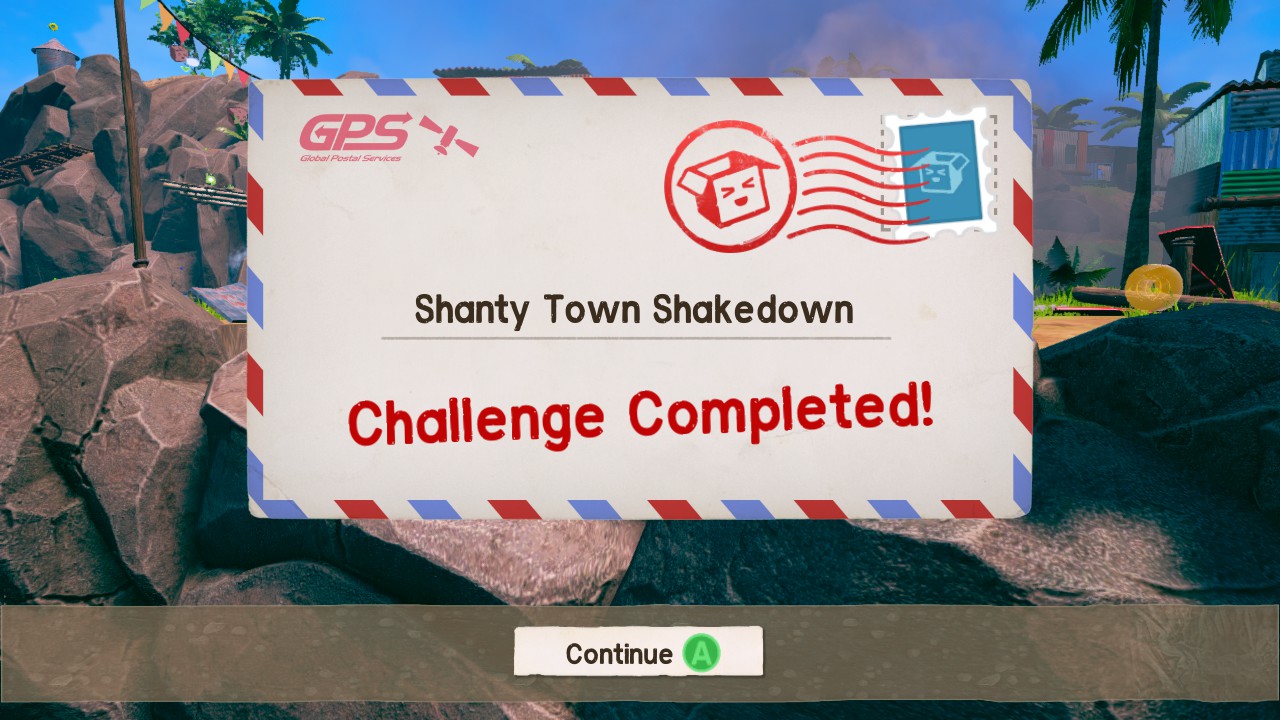 Although difficult, at least this adds to the sense of achievement when you do complete a challenge. The fading out of items after they have been collected is satisfying as it’s nice to keep track of where you’ve been as this can sometimes be a difficult task. The levels are large, and there is no map. There is a navigation system to find the challenge-giving boxes by selecting which one you want and having an arrow lead you there, however, you cannot collect all required stamps purely from these boxes, and there is no way to find the other stamps aside from stumbling into them on your travels. The same goes for the trapped boxes, although you do get some indication that they are nearby from some on-screen dialog reminding you to free them.

Despite the large levels, the game feels relatively small, with only three levels and hub world to explore. However, the replayability is high, with the lure of finding all the collectables to come back to it allows for veteran players to perfect their game and newbies to feel their way around. There are slight variations between the gameplay in the levels, for example, you move faster on the snow and ice of Parcel Peaks (although oddly you are also faster going uphill). 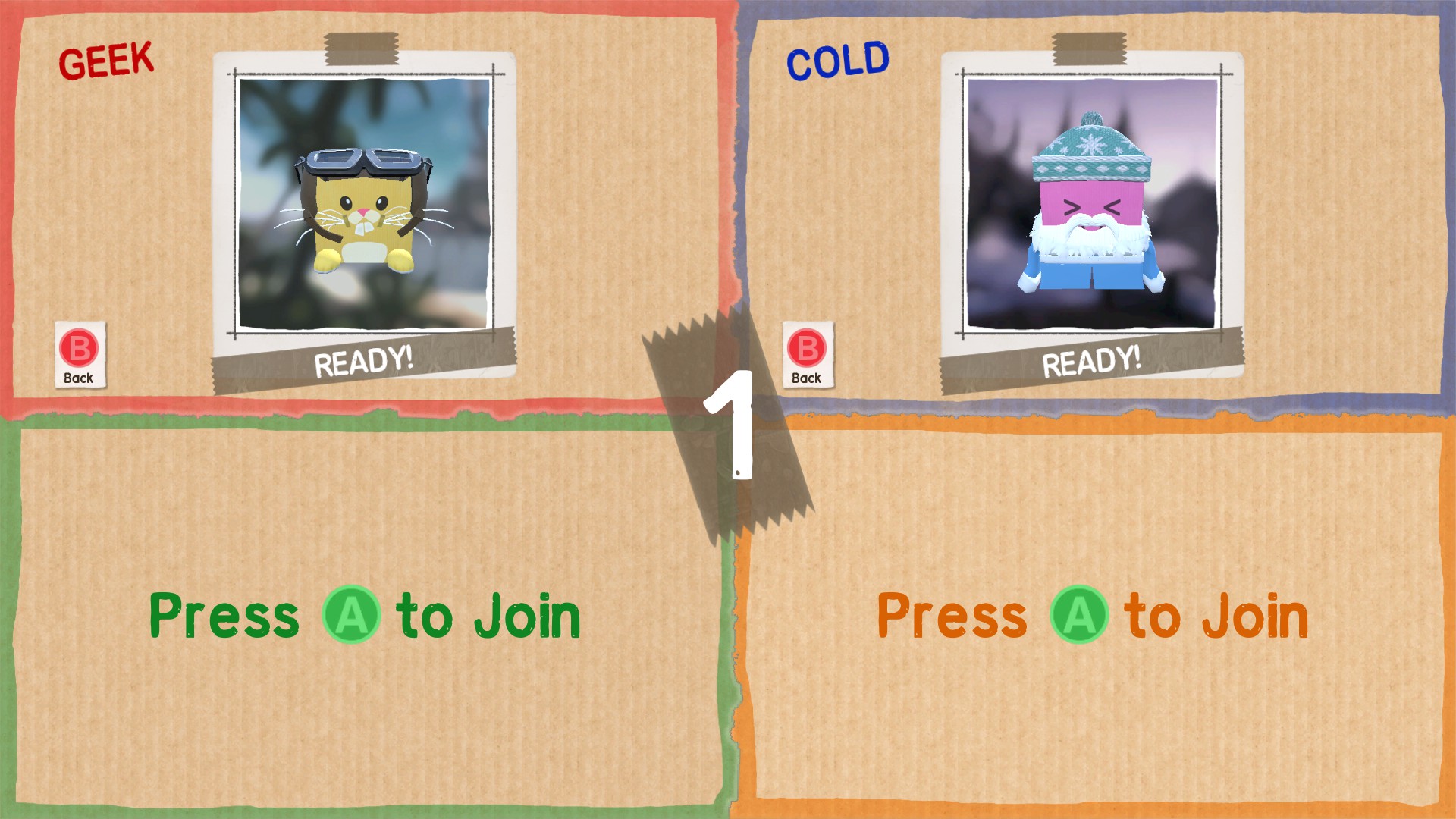 The size of the single player campaign is perhaps due to there being a multiplayer mode as well which  allows you to compete with up to 3 friends using various challenges from the game such as races and collect-em-ups as well as a capture-the-flag type mini-game and ‘Thief’ in which you need to collect coins dropped by your opponents when they are shot. This was actually pretty fun, and there are a variety of mini environments to choose from too, each with different assets and challenges to the type of mini-game you have selected. Multiplayer adds a lot of extra game for your money, is a great way to keep players coming back after they have completed the game on their own and makes it a good contender for a party game.

One stroke of genius is the ability to earn outfits and skins for your box as you complete challenges, and I had fun customising my character. The only issue with this is that the hats seem to affect the physics of your box, making being upright a bit of an issue at times. I did very much enjoy making myself into a bunny though…because bunnies!!

The music is also very well done, and catchy as hell. It would have been nice for a few more tracks for variation, but it didn’t get annoying as repeated tracks often can. The artwork is impressively detailed and has the feel of old school 3D platformers but with some modern day polish.

All in all Unbox is a really fun experience. The difficultly level is sometimes challenging, and it does have that rage quit feeling to it, however, if you persevere with it and really get the controls down the sense of achievement upon nailing a particular course is definitely worth it. The story and dialog are funny and the characters you meet along the way are full of personality and pop-culture references to hedgehogs, bandicoots and ‘Cardboard Duty’.

There are a few things that I would maybe suggest as alterations – the strength and frequency of enemies seems very overpowered in comparison to your measly jump slam attack, and the nitro and health boxes look a little too similar in such a fast-paced game – however, it’s an enjoyable way to spend a few hours, and I can see the urge to 100% it being hard to avoid.

Unbox is available now on Steam.